78 years ago, on 1 August 1944 the Warsaw Uprising broke out. Below we try to describe one of its many episodes – a capture of two German Panther tanks.

This is the short story of three Panzerkampfwagen V “Panther” Sd.Kfz. 171 from I./Panzer-Regiment 27/19.Panzer-Division that were lost on 2 August 1944 in Warsaw, Poland. I have done my best to sort out the facts and present this story, as it happened, to the best of my knowledge. 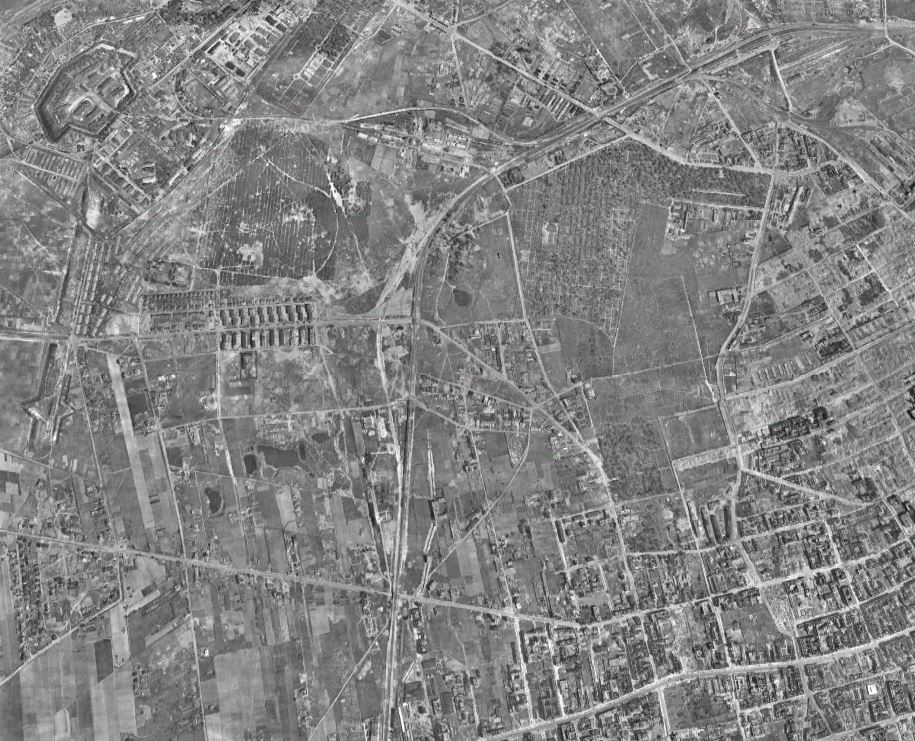 Above is the area of this action in question. This is the Wola district of Warsaw, Poland, aerial view from December 1945. Please refer to this large overview while consulting the smaller maps contained within this document 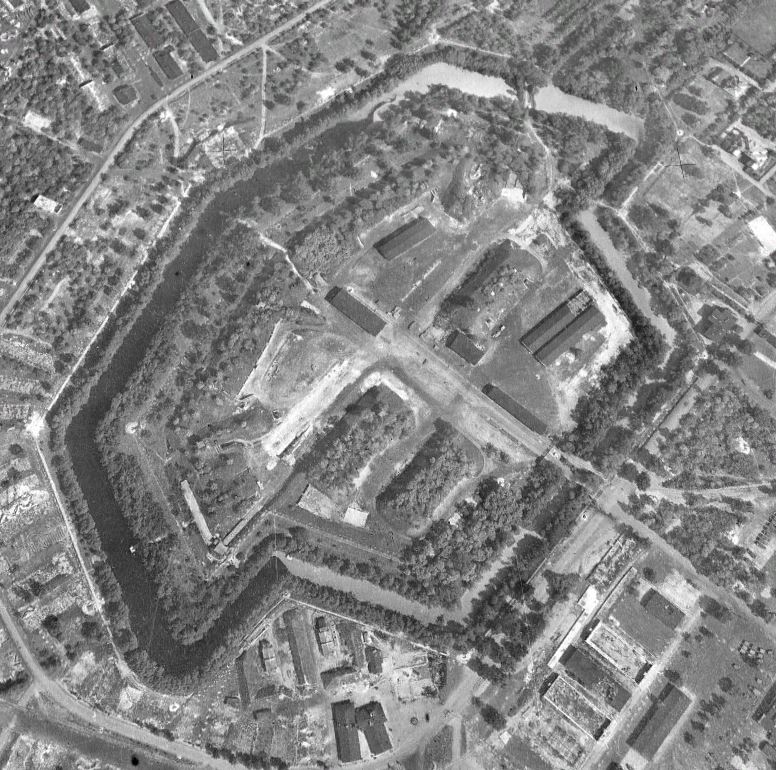 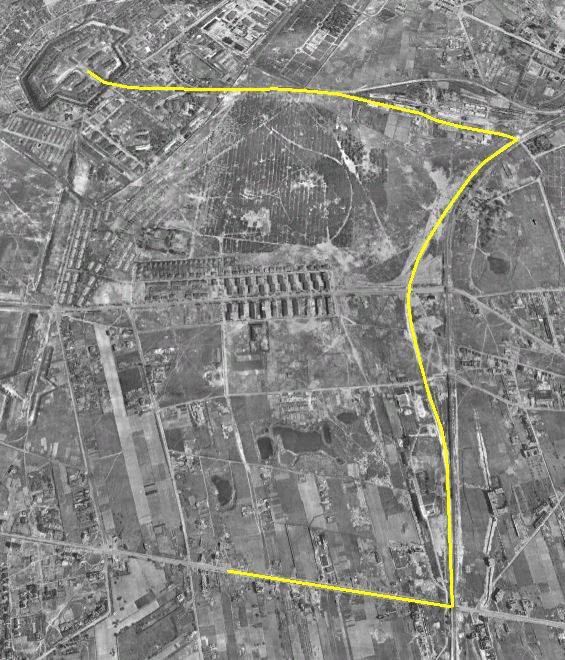 To the right is the planned route I believe the Panthers were to take to get the the workshop. They started on ulica Górczewska heading east. at the junction with the railroad tracks I believe they were to turn north and follow the path mapped out. At the point they were supposed to turn something went wrong, possibly a miscommunication between the commander of the lead tank and his driver, or they could have seen a small group of insurgents and decided to engage, hopeful of a quick action. Regardless of the reason they continued to travel east, these Panthers had no infantry support. 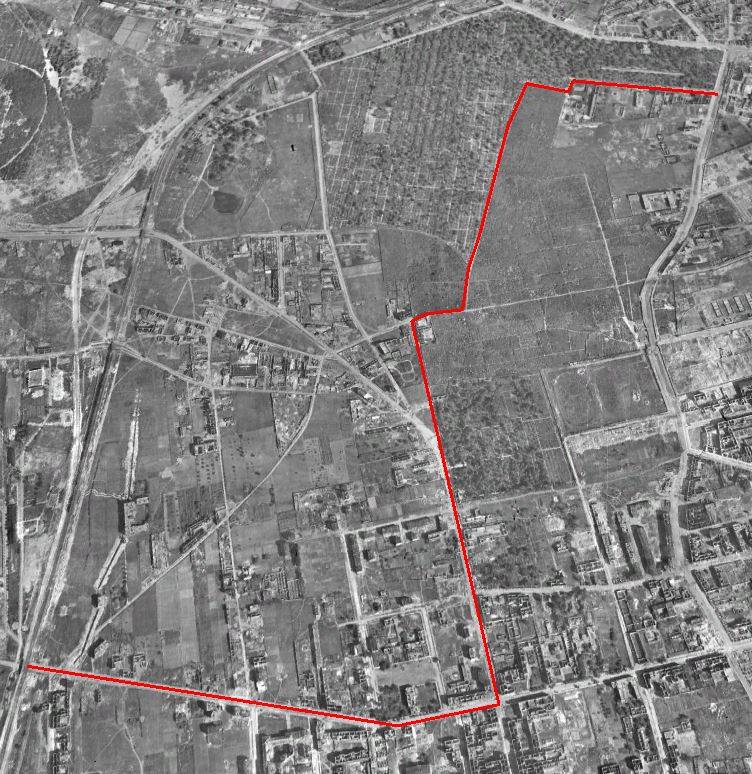 Route of the Panthers to ulica Okopowa (photo: December 1945)

After crossing the tracks the Panthers continued east on ulica Górczewska until they reached ulica Młynarska. At this point they took a left and started traveling in the northerly direction. It is most likely they did not realize that they were already off course. They moved up Młynarska to the junction with ulica Smetna (no longer existing) and took a turn to the east, then a turn to the north. It is my belief that after traveling up Smetna for a bit they started to understand that they were lost. Instead of backtracking they continued in a northerly direction along the wall of the Cmentarz Powązkowski (Powązkowska Cemetary). There was no way through the wall and the decision was probably made to follow the wall around so they kept going down Smetna, eventually reaching ulica Spokojna, after a quick northern then eastern jog in the wall. After moving down Spokojna for a bit they came to the intersection with ulica Okopowa. This is where the fateful choice to turn south was made. I assume they turned south to try and return to ulica Górczewska, but having only been in Warsaw for about a week they were unfamiliar with the roads and probably would have turned to the north on Okopowa and moved to ulica Powązkowska, if they knew that the southern route moved into a much more built up area. 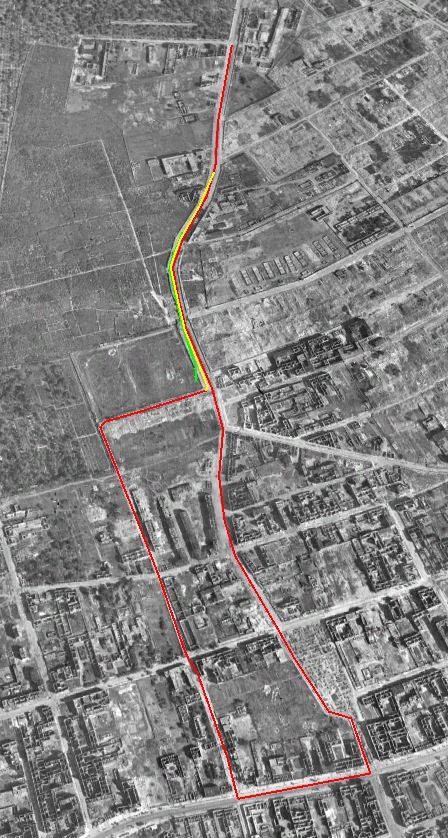 The Panthers started to move south down ulica Okopowa to ulica Wolska and turned west, supposedly looking for a way back to where they had started. Finding that they had gone south too far. Upon reaching ulica Karlokowa they started back north and after a short distance spotted and insurgent barricade near the intersection of Karolkowa and ulica Żytnia. At this point they were engaged by insurgents. Overcoming this attack they continued north along Karolkowa. Upon reaching the gate to the “Telefunken” factory at the intersection of Karolkowa and ulica Mireckiego they were again attacked by insurgents. To get away from the attack they traveled east on Mireckiego back to ulica Okopowa and upon reaching it took a turn north (yellow line), possibly thinking that since there had been no opposition earlier it would be safe to take this route. Upon reaching a point on Okopowa near the Pfeiffer Tannery they were ambushed again. Two of the Panthers were lost and the third turned back to the south (green line) and met its end near the intersection of Okopowa and ulica Mireckiego. 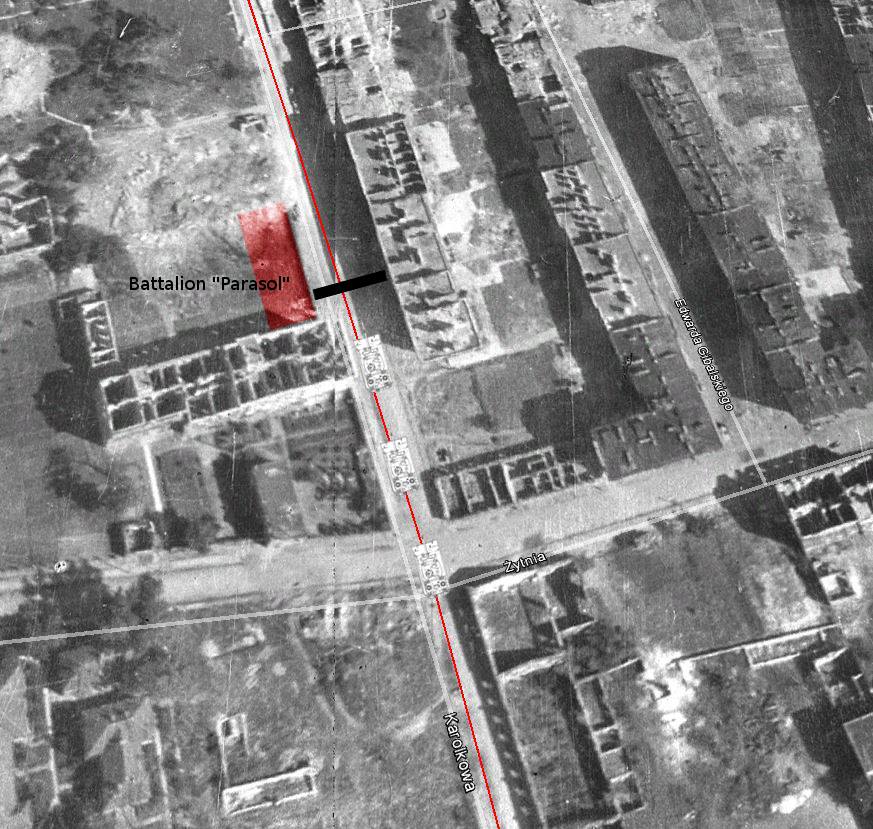 At approximately 8:00 the Panthers reached a barricade on Ulica Karolkowa which had been put up on 1 August 1944. It was composed of beams, boards, trash cans and furniture. The I Platoon of 2. Company, battalion “Parasol” occupied positions behind the barricade. As the Panthers approached they insurgents moved to positions behind the wall adjacent to the Domu Starców (Old Folks Home). They had no anit-tank weapons so as the Panthers moved over the barricade and past their positions all they could do was throw Molotov Cocktails. The attack had no effect, possibly due to the heavy rain that started to fall. The Panthers moved on to the north. 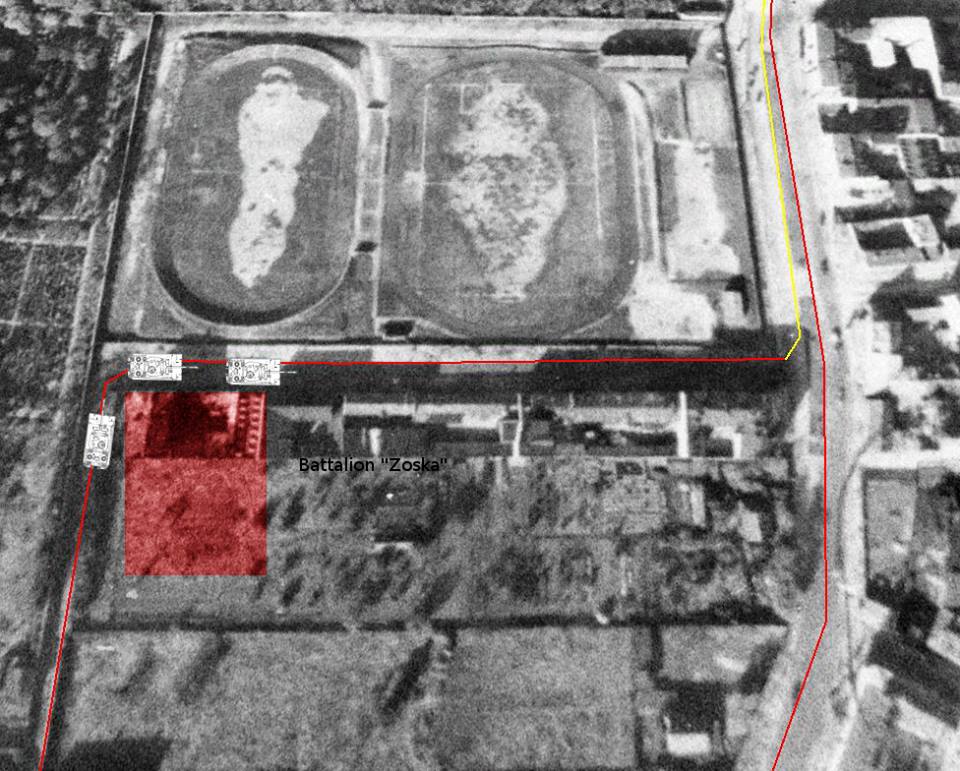 After reaching the corner and turning onto ulica Mireckiego, near the gate to the “Telefunken” factory, the Panthers were again attacked by insurgents. Elements of Battalion “Zośka” attacked with grenades with minimal effect. The tanks moved east to try and escape the narrow street and turned north onto Okopowa (yellow line). 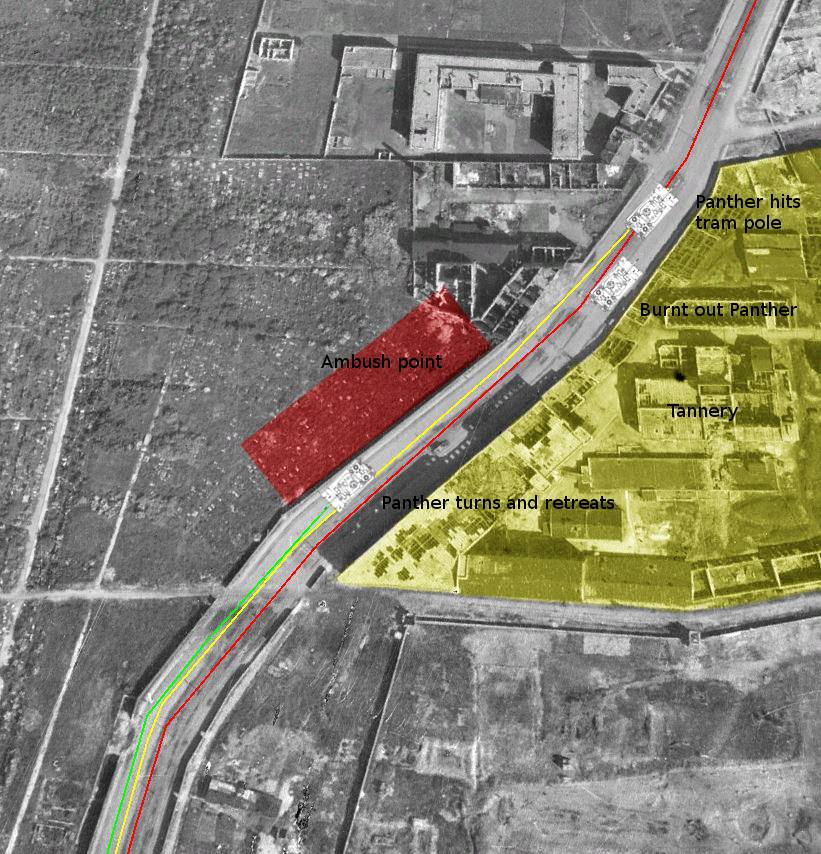 As the Panthers moved north along ulica Okopowa (yellow line), they were ambushed at the Pfeiffer Tannery. Platoons “Alek” and “Felek” of Company “Rudy”, Battalion Zośka. This attack was by Gammon bombs and Molotov Cocktails thrown from behind the wall of the Jewish Cemetary. Pchor. Eugeniusz Koecher “Kołczana” acted as an observer from atop the wall. The first Panther in the column ran into a steel tram pole at the intersection of Okopowa and Gliniana and came to a stop and the crew bailed out. The second Panther managed to turn around and head to the south (green line). The third Panther caught on fire after being hit by several Molotov Cocktails, the crew bailed out and the tank burnt out. (The red line is the original route south when the Panthers passed through earlier). 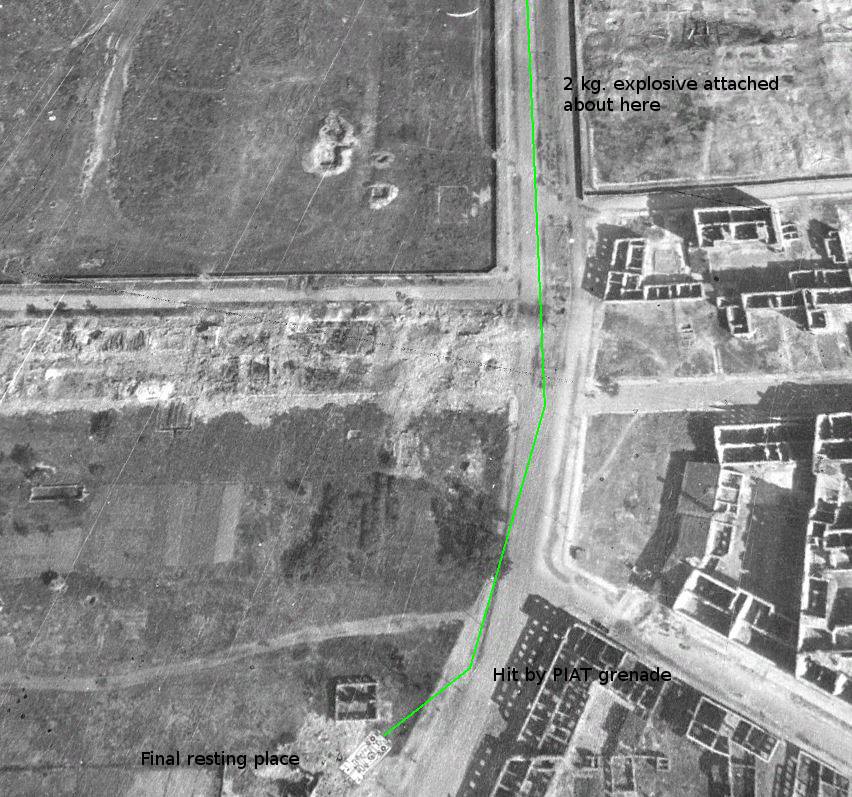 Loss of the third Panther

The second Panther of the column had managed to turn south to try and escape the ambush, heading down Okopowa. After it had driven a few meters the Platoon commander of the Kedyw unit Squadron 1806, 1st Rifle Regiment managed to attach a 2 kg. improvised explosive to the Panther. As the tank continued south it passed the command post of the group “Radosław” and was hit by a PIAT in the back of the turret. The Panther veered to the right and smashed trough the wall along Okopowa, slid down a 1.5 meter embankment and came to rest in a wooden cottage. The crew was captured.

Waverma’s production is often overlooked. They were exclusively responsible for converting the Pz.Kpfw. II’s into Marder II’s and Wespes. Gearboxes for FAMO tractor were also manufactured there. Every Marder or Wespe after leaving Waverma plant at Czechowice (today’s name is Ursus), was transported to Fort Bema for finishing touches and testing – there was a vast depot and workshop in that old Russian fort. The workshops were organizationally a part of Waverma, too.

… A total of armored vehicles available to the Germans on August the 1st 1944 was as follows:

… After August the 1st the Fort Bema unexpectedly finds itself very near to the combat zone. And it was main maintenance center for entire 29th Panzer Corps. Which also means 19. Panzer Div. The premises were surrounded by a brick wall with shooting holes in it. It was still operational, therefore two Panther G tanks of II/27 Pz.Regt. thundered there in the morning of 2nd August. They most likely required some minor repairs. They got lost however and were captured by the troops of “Radosław” Group at Okopowa St…

… On August 4th another tank of the battalion was captured at Ochota. This time it was Pz.Kpfw.IV, one of the tanks covering 19. Pz.Div’s column movement through Al. Jerozolimskie and ul. Grójecka towards Warka and Magnuszew bridgeheads (the rest of the Division bypassed the town South of Mokotów). However, for some unclear reason the tank was not used against its former owners and was lost eventually… 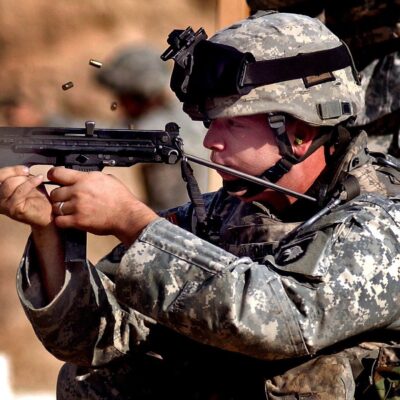 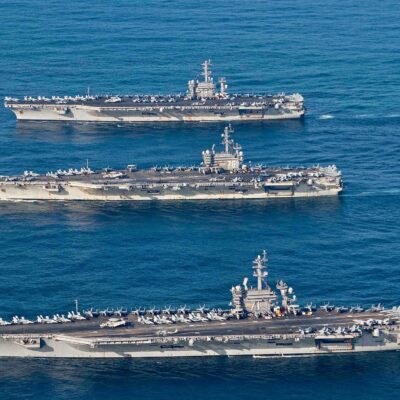