Two new semi-automatic designated marksman rifles were unveiled by ZMT at MSPO. The SKW338 is chambered in 8.6×70 mm and

Zaklady Mechaniczne Tarnow (ZMT) premiered two SKW (Samopowtarzalny Karabin Wyborowy – Semi-automatic Designated Marksman Rifle) weapons. These were developed solely by ZMT and are not related to any Polish Armed Forces program. The development process just started, and the first firing tests will be conducted between September and October 2017. The shown units were completed just a few days before the Kielce trade show.

An elegant, well designed SKW weapon family was showcased by ZMT at the MSPO. These semiautomatic precision rifles maintain the AR-10/AR-15 ergonomics but are different on the inside. Off the shelf AR accessories can be used with SKW rifles.

The SKW rifle family is designed by Roman Uznanski and Rafal Szela. They departed from bullpup concept used in earlier ZMT Tor, Bor and Alex-338 rifles and decided to create a weapon in a classic configuration. The initial idea envisioned the creation of precision rifle fed in 8.6×70 mm (.338 Lapua Magnum) ammunition. Later, it transpired that the design can be easily scaled for the 7.62×51 mm round. Hence the creation of SKW308 model.

SKW338 and SKW308 are equipped with a dedicated upper receiver with a monolithic ridge NAR mounting rail (NATO Accessory Rail) and a lower receiver designed to resemble the AR-10 and AR-15 functionalities and ergonomics. Both calibers are gas-operated with a short stroke piston and have a multi-position gas regulator, with settings accommodating sound suppression systems. 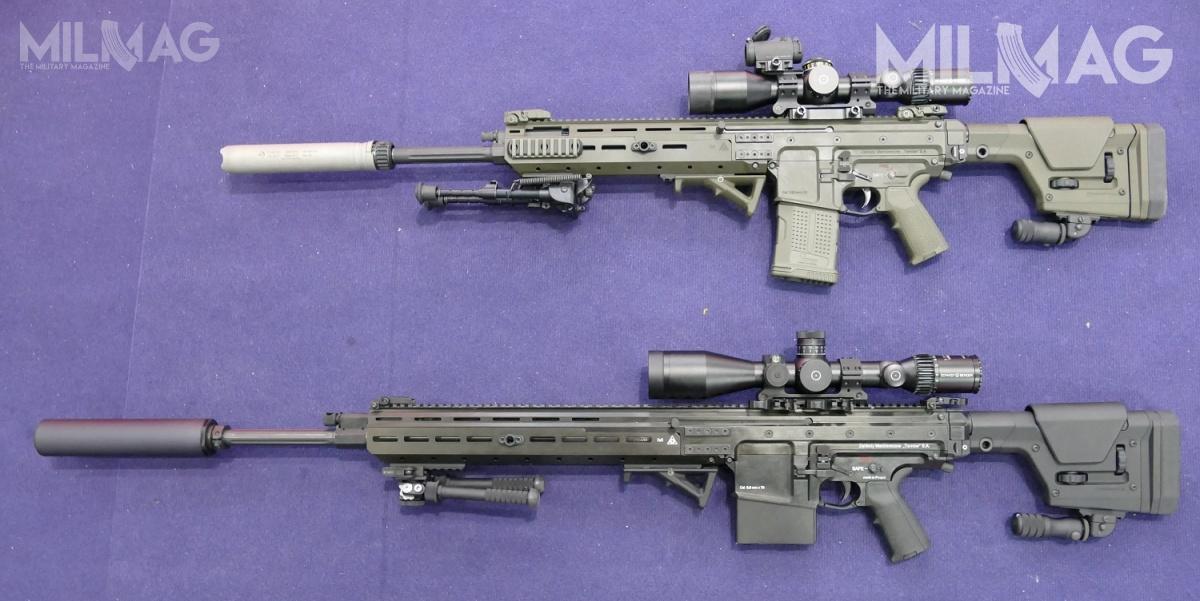 The SKW338 model, as shown at MSPO, is equipped with a 660-mm (26-inch) barrel. The smaller SKW308 has a 508-mm (20-inch) barrel. Weight of the first one is 8 kg while the second is 6 kg. Mass was the main reason for not creating a multi-caliber weapon, however rifles have easily changeable barrels.

Lower receiver, bolt carrier group and return mechanism differ from AR system. Cocking handle can be moved to either side of the weapon and does not move while shooting, but can be still used as forward assist in case of malfunction. The return mechanism has a return spring and a receiver supported bumper. This allows for the stock to folded at an angle. Unlike the AR-10/AR-15 the stock does not incorporate the return spring tube. Use of commercially available stock is still a possibility. 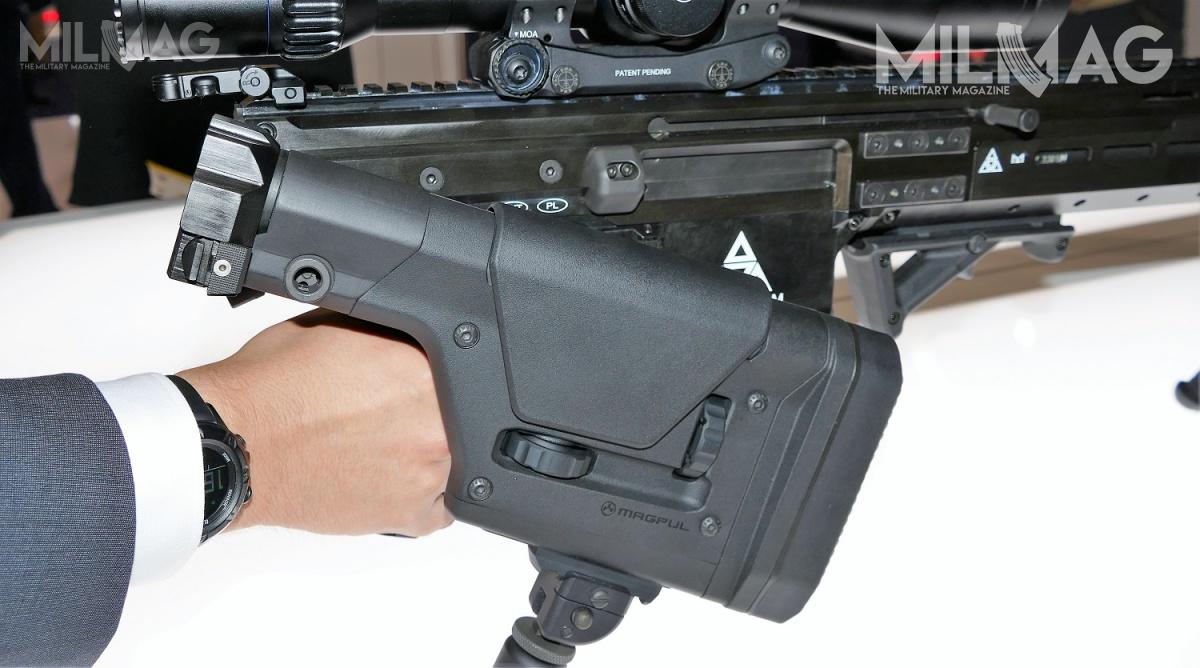 Unlike in AR systems, lower receiver does not contain the return spring sleeve. This allows for folding stock.

Lower receiver, together with magazine well are similar to AR weapons. SKW308 utilizes polymer, 20-round IMI Defence magazine. Lack of compatible solution for SKW338 forced the ZMT to develop their own, 10 round steel magazine. Incorporating a disassemble button into the company logo on this magazine is a nice touch.

The middle triangle of the ZMT logo on the magazine bottom acts as a disassembly button / Photos: Remigiusz Wilk

Safety/fire selector are placed identically to AR weapons, on both sides of the receiver. Interestingly, SKW338 has a safety with 90 degrees travel step and the SKW308 has a 45 degrees’ step. Magazine release and bolt release are placed in the AR-10/AR-15 positions.

SKW338 was anodized in black. SKW308 was also anodized but also Ceracoated. Interestingly, bolt carrier group guides were made of steel, not aluminum. This quickly wearing element can be swapped out by unbolting of 6 bolts which affix the guides to the upper receiver.

Disassembly involves removal of trigger group lower pin which swivels away. Than, to remove the return mechanism and the bolt carrier group the upper pin must be removed. The last step is removal of the weapon body pin. Note, that SKW uses Magpul MLOK mounting standard. This forced ZMT to use Magpul logo on the weapon body. It can be seen just next to ZMT logo.

The system scalability allows for easy conversion for smaller calibers (like 5.56 x 45 mm or 7.62 x 67 mm – .300 Winchester Magnum, or 7.62 x 54R). Use of original SWD rifle, 10-round magazines is also an option. The SKW weapon family is semiautomatic and ZMT has full set of patent right to it – this makes the weapon system easy to market for the civilian buyers. 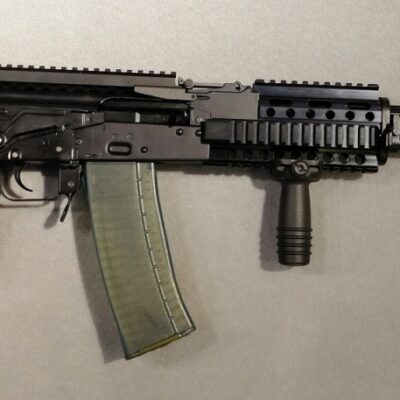