Incoming replacement of Polish Armed Forces’ helicopter fleet can be a chance for better use of Polish industrial potential. Polish Aviation Works (PZL) Świdnik had developed and serially produced native helicopters in the past, they also handled manufacture and modernization of licensed constructions. Now, an opportunity arises for Świdnik to deliver new helicopters made in Poland.

According to PZL Świdnik CEO, Jacek Libucha, the Polish Armed Forces will need a few hundred new helicopters in the next two decades. Currently used helicopters will need to be replaced with newer constructions, and the changing circumstances of military operations demand an increased number of helicopters being used. 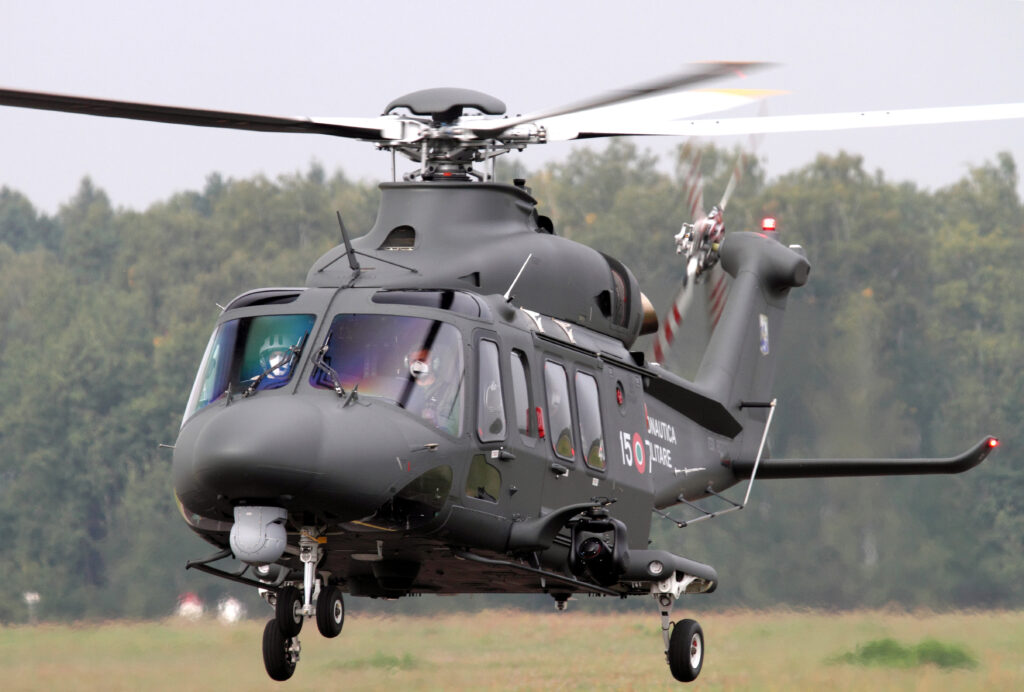 PZL Świdnik organized a demonstration of the AW139 helicopter, which could be produced in Poland for the Polish Armed Forces. Presented model bore the colors of the Italian air forces

As stated by Jacek Libuchq, within the next 20 years, approximately 300 helicopters flying for the Polish Armed Forces will reach the end of their service life. Around 200 of them could possibly be replaced by AW139W. The CEO of Świdnik assumes that his company could produce eight to ten helicopters per year.
“Such numbers will keep the employment steady. Such production rate won’t meet all the needs of our military forces, but we assume we won’t be the sole purveyor of new helicopters. At that rate, we wouldn’t have to expand our infrastructure—with 10 helicopters per year we still have some spare capacity to increase the production in case of urgent need.” 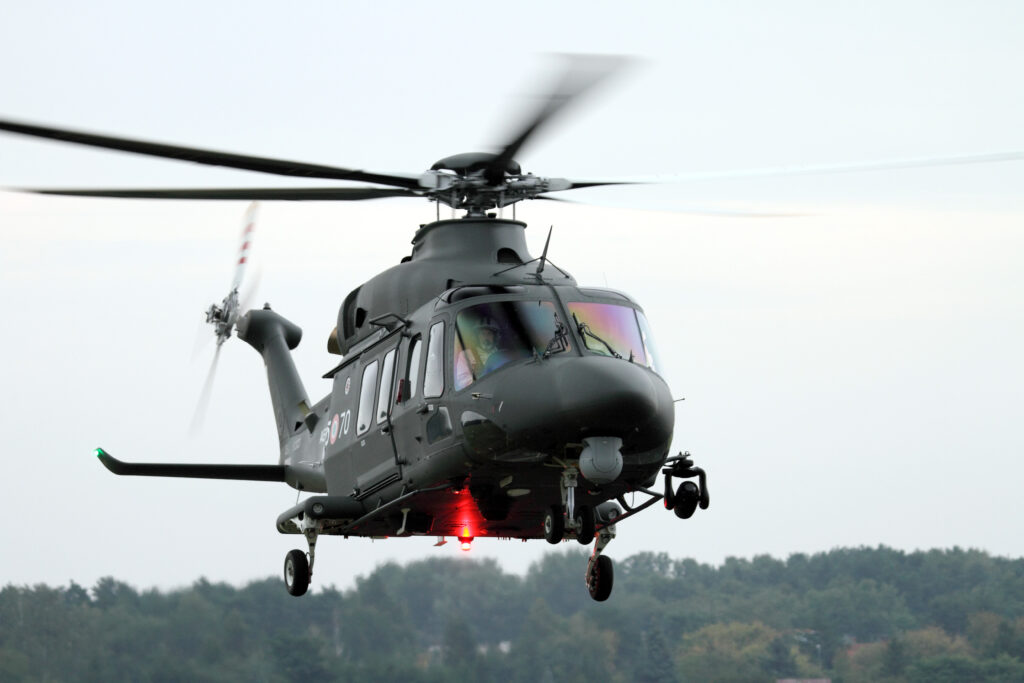 AW139W conception assumes moving the manufacture of all the possible elements to Poland, and PZL Świdnik acquiring all the rights for the project, allowing for future modernization according to needs of Polish military

AW139 has a great potential for polonization. Jacek Libucha’s aim is to manufacture as many of the components as possible in Poland, with the final montage taking place in PZL Świdnik and the company acquiring the full rights for the design, allowing them to introduce localized modernization and technological solutions. Start of the production in Świdnik wouldn’t mean an end to the Italian manufacturing line, being more of an extension and supplement.

It needs to be noted that the AW139 frames are already manufactured in Świdnik. At the turn of 1999 and 2000 Leonardo (then still known as Finmeccanica) formed a helicopter airframe development center in cooperation with the Polish company. Now PZL Świdnik is participating in production of airframes for the majority of Leonardo’s helicopters. Approximately 74% of AW139 manufacturing man-hours—the time needed to build the frame—takes place in Świdnik. 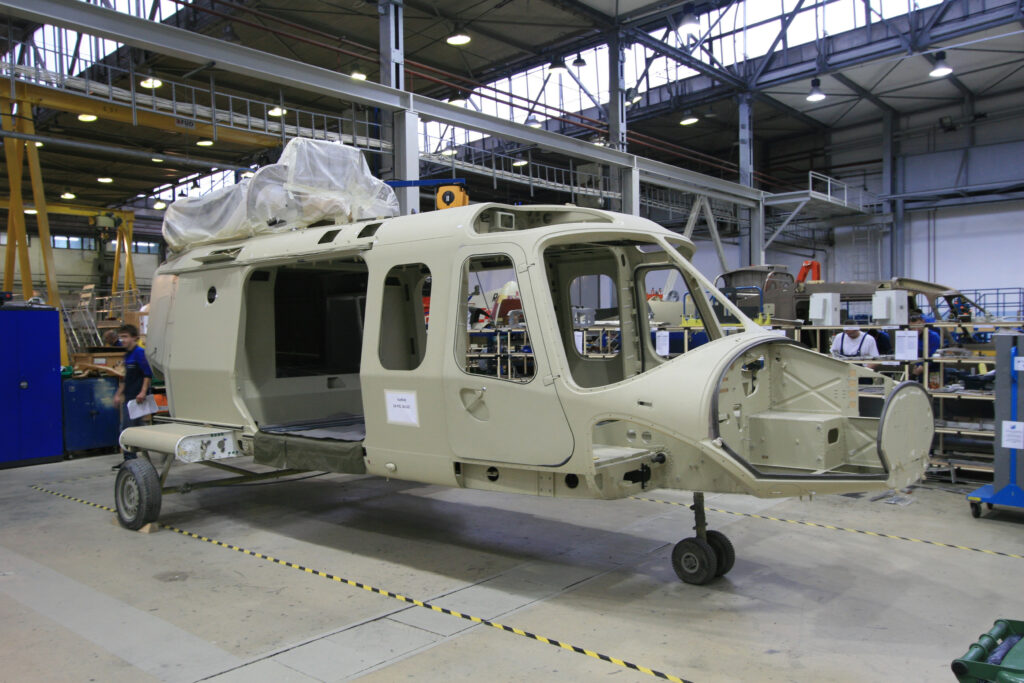 Already 74% of man-hours dedicated to production of AW139 takes place in PZL Świdnik. Pictured airframe on the assembly line in Świdnik

Not all elements of the AW139 helicopter are made by Leonardo, however. Pratt & Whitney PT6 engines are supplied by an American producer, which happens to have one of its work in Poland—Pratt & Whitney Rzeszów. According to Jacke Libucha, approximately 80% of the engine parts are produced there. He also stated in case of full polonization of AW139, Rzeszów will be able to fully handle production of the engines for Polish helicopters.

Avionics will need to be delivered by specialized suppliers. With the AW139W program, PZL Świdnik will be able to acquire, or more accurately reacquire and expand expertise regarding the avionics integration. That is one of the main goals for the company. Regaining the capability to perform flight tests on a much larger scale is another goal. Jacek Libucha also notes that the Polish Armament Group and the Air Force Institute Of Technology have great potential regarding manufacture and integration of weapon systems for Polish helicopters.

AW139W could replace the obsolete Mi-2 and aging PZL W-3 Sokół. When it comes to the size, AW139 is slightly smaller than Sokół, but the former’s transport capabilities and performance are much better. 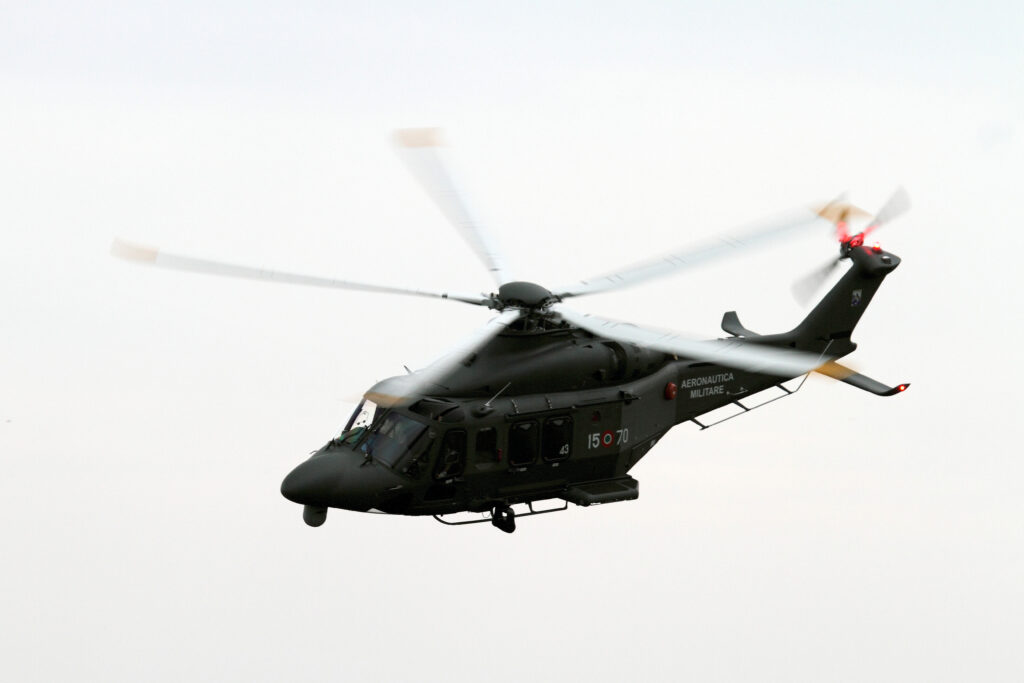 Due to greater engine power, AW139W has much better performance than other helicopters of comparable size used by Polish Armed Forces

With a slightly shorter main rotor—13.8 m (18.7 m for PZL W-3), AW139 has comparable capacity to Sokół, but in practice the payload can be increased from 6400 to 7000 kg. That is mainly due to the propulsion system. AW139 is powered by twin Pratt & Whitney Canada PT6C-67C engines. Each of them offers 1252 KW (1676 horsepower), compared to total output of PZL-10 Sokół’s both engines of 1324 kW, or little more than half of AW139 output. More powerful engines allow reaching a maximum speed of 306 kph, 46 kph more than Sokół. Great power of propulsion also allows for much better maneuverability and lower sensitivity to high temperatures. 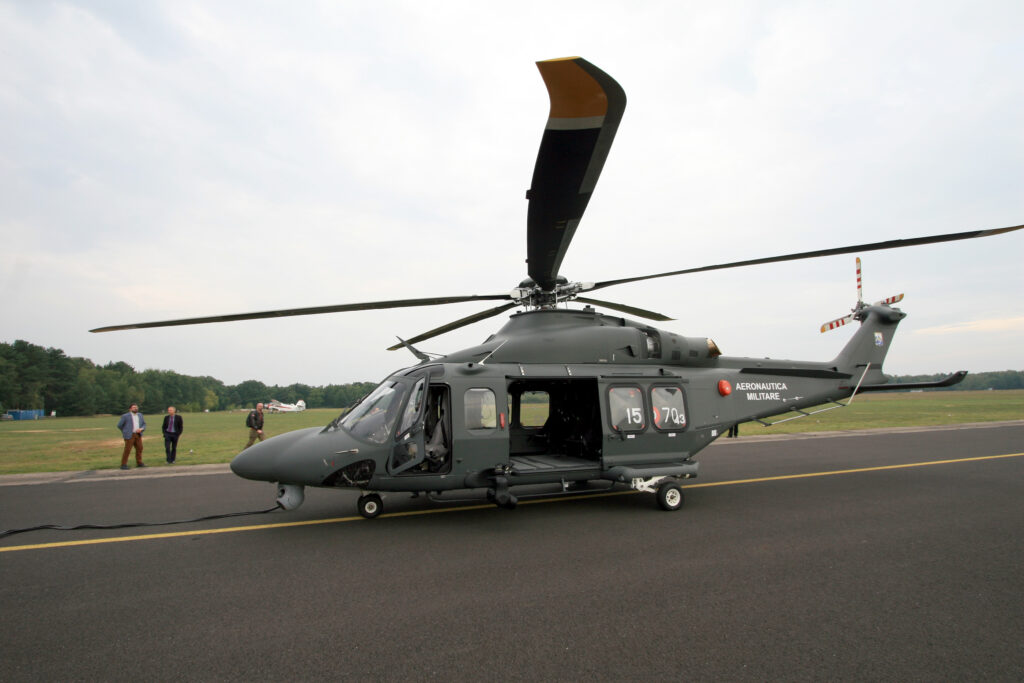 Despite its relatively small size, AW139 can hold 15 passengers or 10 soldiers in full gear

Those aren’t the only advantages of AW139. Due to its spacious cabin, the helicopter can carry up to 15 people, or 10 fully equipped soldiers. Disembarkation is also made much easier as AW139, unlike Sokół, has a much wider door. 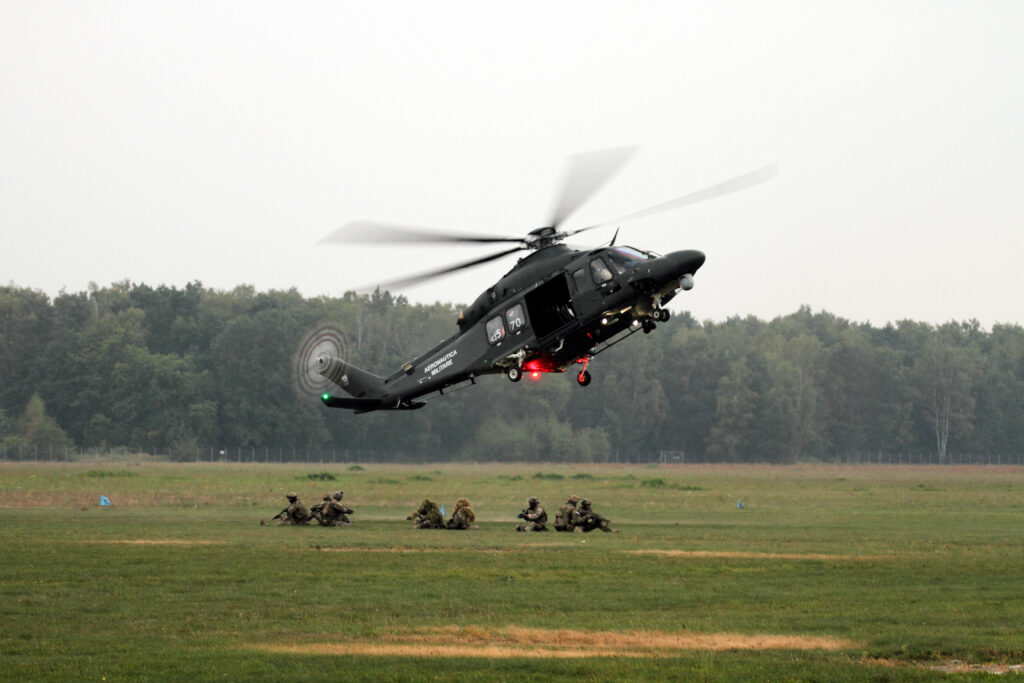 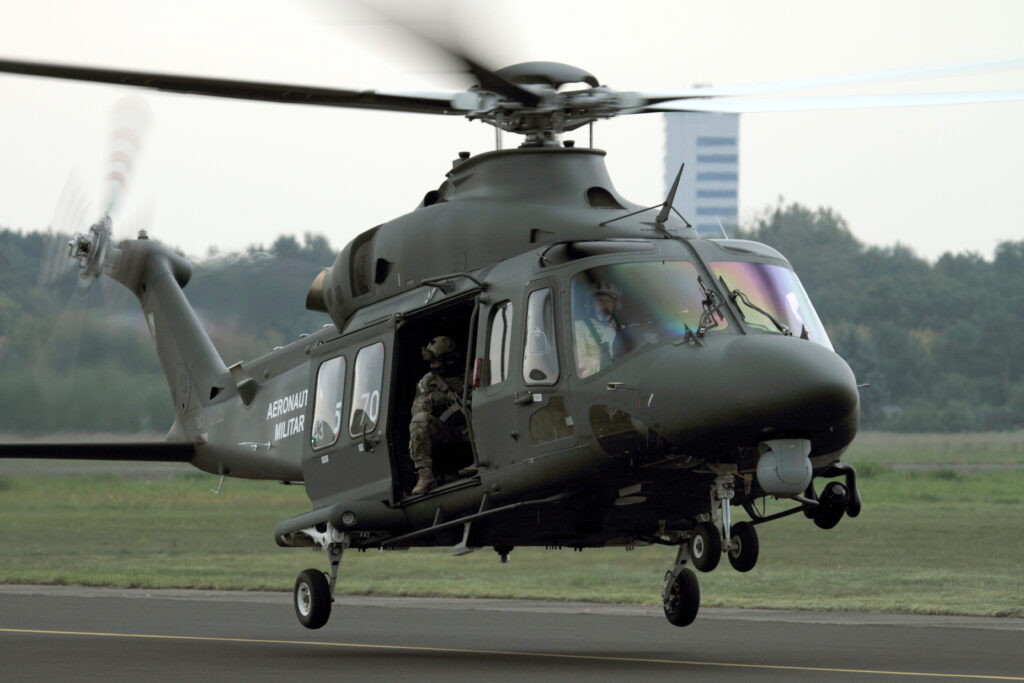 Advanced avionic systems used in AW139 take the burden off the pilot during the flight, providing necessary data for the current phase of operation. Computer systems control the conditions of the individual components and notify the crew about malfunctions. Pilots don’t have to keep their eyes on such things as engine readings as it is done for them by the computer 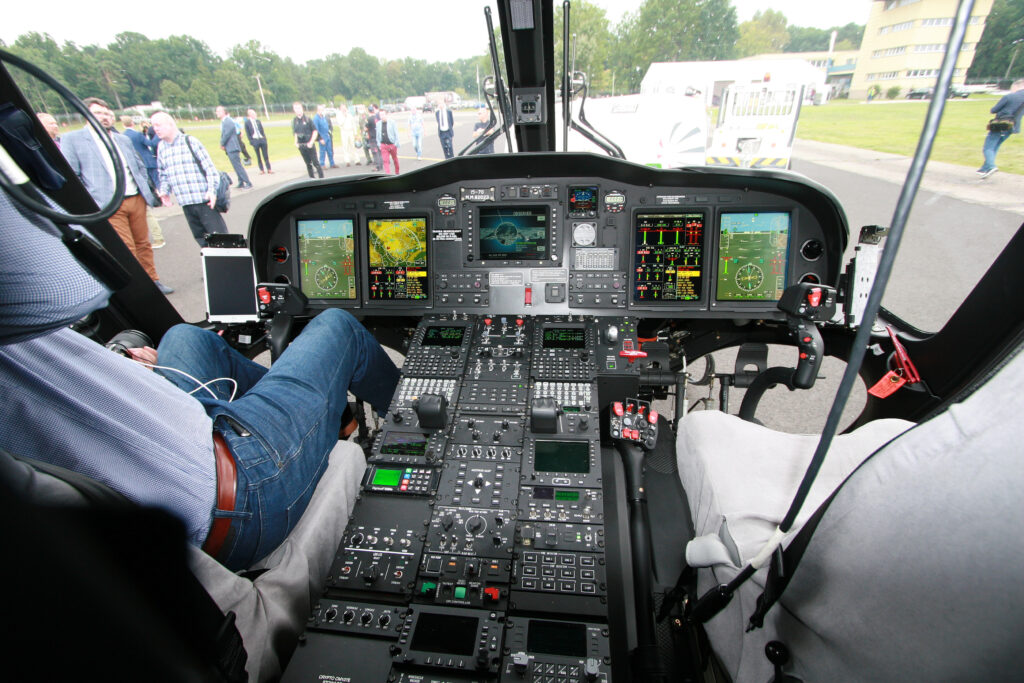 Four LCD screens present navigation data and flight parameters, and the fifth one can display a digital map

The pilot cabin has four 8×10 inch color liquid crystal displays, and an additional fifth one, that can show current images from the external camera using visible light or thermal imaging, or a digital map. The cabin conforms to the use of night vision goggles.

Besides the present-day imaging systems supported by computerized flight management systems, AW139W pilots will have a four axis autopilot aided by radionavigation systems and GPS. The crew will also have enhanced imaging systems and laser-based obstacle warning systems operating in 360º range. 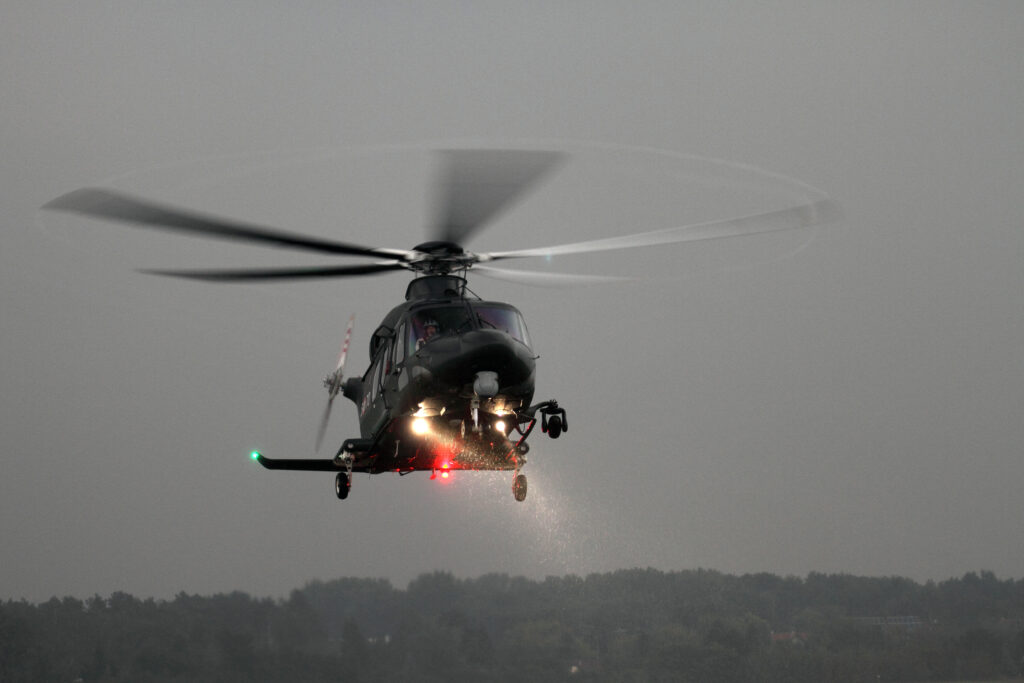 Machine guns or sniper rifles in 7.62 mm or 12.7 mm calibers can be mounted in doors or side windows. AW139W can be also equipped with four external hardpoints that can be used to attach a wide array of armament. Each can carry one gun pod with 12.7 mm machine guns or 20 mm cannons, a 70 mm rocket launcher with seven, 12, or 19 tubes, four guided air-to-ground missiles, or two air-to-air missiles. The armament placement can be asymmetrical, with different weapon systems on each side of the helicopter.

Another advantage of AW139 is the short time needed to attach external hardpoints. According to PZL Świdnik representatives, the helicopter can be adapted to carry external armament in 60 minutes.

We also need to take into account technical support. AW139s belong to a new generation of rotorcraft. One of the main design goals was reduction of man-hours needed for servicing. Various solutions, such as maintenance-free articulation bearings of the main rotor ensure trouble free operation and lower demand for periodic inspections.

Redundant electric and hydraulic systems increase safety of use, even during combat operations. Crew and landing parties will be protected by ballistic plating installed in the floor and doors.

AW139W will be suitable for a variety of missions, starting with regular cargo flights, transporting troops (including special forces), search and rescue operations, evacuation of casualties, command and control, reconnaissance and observation, and finally providing ground support with onboard weapon systems 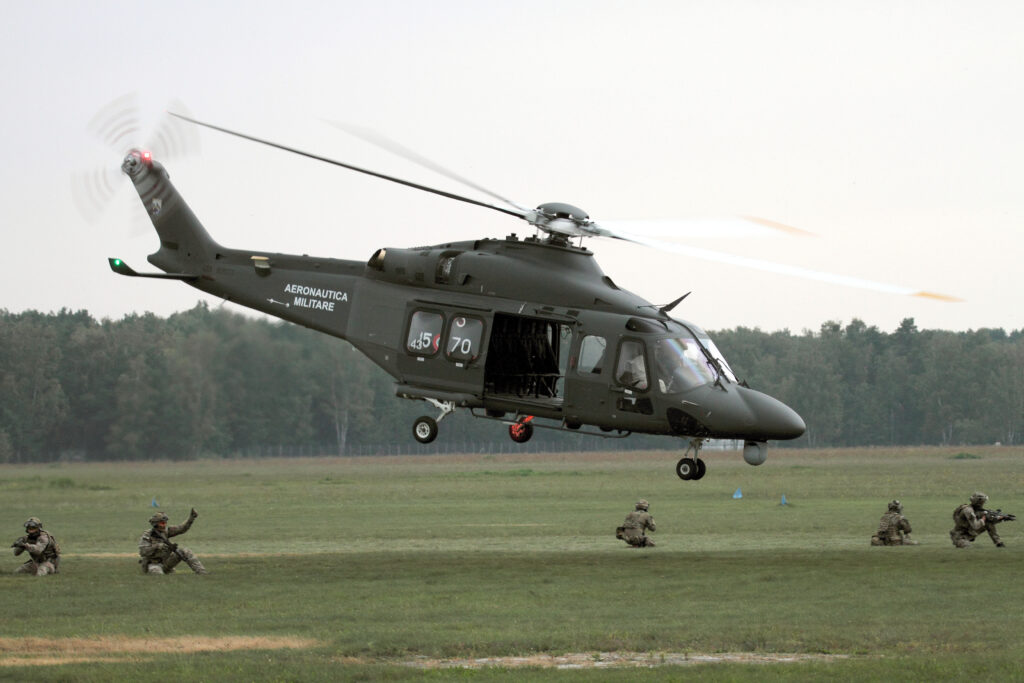 AW139 is an universal construction allowing it to fulfill a variety of tasks, such as landing special forces as shown during the demonstration for Polish military

Moving to the production of the whole AW139 helicopters in Poland will be made easier as Świdnik is already producing their airframes. In the opinion of Świdnik CEO, it will take approximately 24 months to build the first complete helicopter once the program is started—Jacek Libucha notes it would be a very tight deadline, but possible to meet. It only covers the basic transport version, however. He estimates that reaching the capability to produce an armed variant would require at least 36 months. 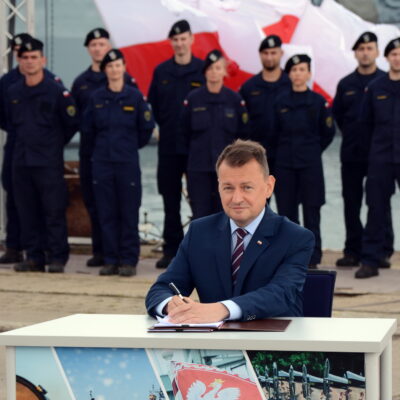 Next Step Of Miecznik Program

When the Polish Minister of National Defence, Mariusz Błaszczak, formally approved the motion to acquire frigates for the Miecznik (“Swordfish”) program…